In recent lessons we have discussed the concept of social control.

We used the following resources in class:

Today we worked on Assignment 2 – Socialisation and Gender. This assignment requires you to write a mini literature review to prepare you for writing an investigation project (IP) in Term 3. For detailed information, click on the following link:

We continued our discussion of ‘gender as a social construct today’ and reviewed our understanding of the information on pg.252 -257 of the text book.

The following website is particularly useful for exploring gender from a sociological perspective:

At the end of the lesson you were given the following extract from Giddens (2006):

This adds some more ideas to our understanding of how theorists might explain gender socialisation.

Today we also started talking about ‘hegemonic masculinity’ – a term coined by R.W Connell. We will look at this term in some more detail next lesson. 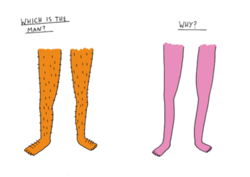 The aim of today’s lesson was to continue to understand the process of identity construction. In other words, understanding how socialisation leads to the creation of identity (i.e. a sense of self).

We talked about how, what Durkheim might call, ‘social facts’ such as gender, religion, class and ethnic background, affect our concept of self.

From these ‘social facts’, gender was selected for further study. During the lesson we emphasized the fact that sex and gender are different. While someone’s sex is biological, their gender is ‘learnt’ through socialisation; as we noted in class ‘Traditionally, sociologists view gender as a social construct.’

We looked at the role that family, particularly parents, play in shaping our gender through the toys that they encourage us to play with, and through the differing expectations they have of our abilities (see BBC documentary: Is your brain male or female? 2015). We tried to apply functionalist, conflict and interactionist theory to the idea of gender socialisation.

We also read pg.252-257 of the Germov & Poole textbook to deepen our understanding of the concept ‘gender’ in sociology. We also made attempts to connect what we were reading with theory. See student examples below: 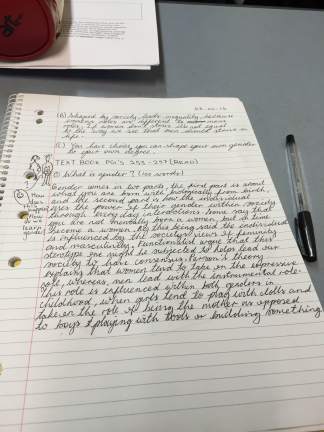 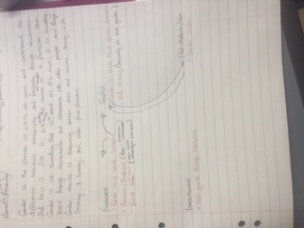 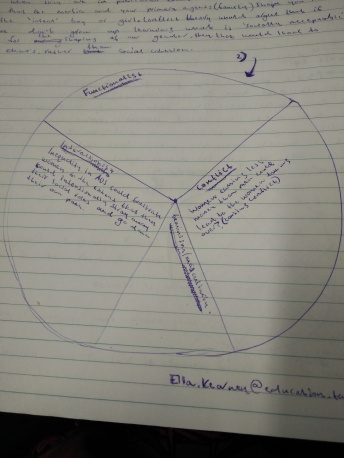 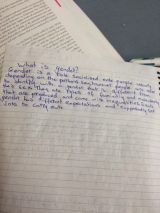 After reviewing the test in today’s lesson, we clarified our understanding of the stages and agents of socialisation. The stages of socialisation include the primary, secondary and tertiary stage. The agents include family, peers, school and media.

The agents allow for socialisation to occur. During primary socialisation, the family agent is of particular importance. For most cultures, the family agent is the key socisalising agent. Our family is our first reference group (i.e. we refer to the actions of our parents when making decisions about our own actions). Families, of course, vary depending on culture, ethnicity, class and religion. These factors will have a significant impact on a child’s socialisation.

In class, we watched the following clip from the documentary ‘Jesus Camp’, which shows how religion can affect primary socialisation:

We also discussed secondary socialisation. During this stage, peers and the institution of school play a key role in an individual’s socialisation. Peers have grown in importance as a result of mobile phone ownership and internet usage among younger people.

According to the Children’s Participation in Cultural and Leisure Activities Survey conducted by the Australian Bureau of Statistics (ABS, 2008-09), in 2008-09 three-quarters (76%) of 12-14 year olds owned a mobile phone.

For more information on internet and mobile phone usage among young people in Australia click here.

In terms of the role that school plays in an individual’s socialisation, Merton uses the following concepts:

Manifest functions: these socialising functions are the more ‘present’ or ‘obvious’ functions of the institution of school – such as ‘teaching and learning’.

Latent functions: these socialising functions are the less ‘present’ and less ‘obvious’ functions of the institution of school. Another word for ‘latent’ is ‘hidden’. An example of a latent function is the school as a place whereby people of similar backgrounds can find suitable partners (remember that Merton is a functionalist so he is old school). Another example is the school as a place whereby social class can be reproduced. Middle class children learn to become middle class adults (i.e. they learn the key to staying in the ‘club’).